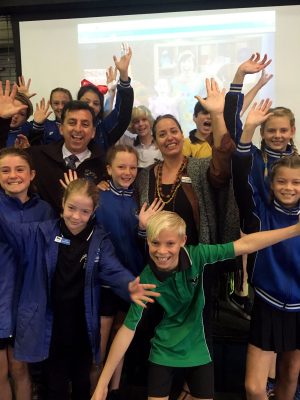 With the CinefestOZ Film Festival on in the South West from the 22-26 August, students had the opportunity to see two celebrities at our school.
Jub Clerc addressed the whole school during Mondays assembly where she outlined the events and films suitable for children to view as part of the festival. She also spoke about the importance of teamwork and working to your strengths when making a movie, comparing this to how a school operates. The Director is like the Principal, the crew are the teachers and the students like actors…all equally important and all part of the creative process. Jub, a proud Nyul Nyul/Yawuru woman, has worked on The Circuit, Bran New Dae, Satellite Boy, Jasper Jones and Mystery Road. She wrote and directed a chapter in the feature film The Turning which won two major Australian film awards. She hosts the television program on NITV Mugu Kids with her daughter and her first play won the 2017 Kate Challis Award.

On Tuesday the Dance Extension team were visited by Emma Booth whose acting credits include Glitch, American TV series Once Upon a Time, and film Hounds of Love, for which she won the 2017 AACTA Award for Best Actress in a Leading Role. Emma gave great insight into how actors embrace all their emotions, handle nerves, brush off negative comments and celebrate their uniqueness. The students enjoyed asking lots of questions about her experiences.
Congratulations must also go to our neighboring high school, Cape Naturaliste College who took out first place in the CineSnaps Student Short Film Competition. James Kenworthy and Cooper Warwick demonstrated a strong understanding of the basic elements of film-making with their film Gateway.