It was a cold and wet day on Wednesday 27 April 2022 as the Australian and Aboriginal flag was raised to the masthead then immediately lowered to half mast.

At 11am we at Vasse PS held a special online assembly commemorating ANZAC Day (Monday 25 April). This year due to Covid-19 we were unable to come together for a whole school assembly so we had a virtual online event viewed by the whole school and parents were also able to link in from home. The Assembly was hosted by the Student Leaders with Principal Simon Mansfield and Special Guest, returned Serviceman and City of Busselton Mayor Grant Henley. We then bowed our heads for the Prayer of Remembrance.

“Today we remember, with thanksgiving,
those who made the supreme sacrifice for us in time of war.
We pray that the offering of their lives may not have been in vain.
Today we dedicate ourselves to the cause of justice, freedom and peace,and for the wisdom and strength to build a better world.”

Students from the Yr 4 Choir led the whole school in singing the Song of Australia with everybody joining in the chorus. https://www.youtube.com/watch?v=0Vkc4PeriGY

Mr. Mansfield addressed the assembly, setting the scene and encouraging students to reflect on what it would have been like for our Australian servicemen fighting in war overseas.

Mayor Henley spoke about the “great sacrifices of our diggers in years gone by” and about his ancestors contribution and his own time in service.

We then listened to the moving story ‘Alfred’s War’ written by Rachel Bin Salleh and Illustrated by Samantha Fry. https://storyboxlibrary.com.au/stories/alfreds-war. 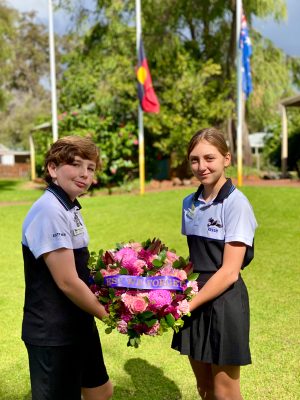 A beautiful wreath was laid by student council members at the base of the flagpole. Flowers have traditionally been laid on graves and memorials in memory of the dead. We are laying a wreath today to remember and commemorate all the Australians and New Zealanders who have died, not only at Gallipoli, but in military service everywhere.

Our Student Councillor flag raisers valiantly stood alongside the flag poles during a heavy downpour as Mayor Henley recited the Ode, followed the The Last Post and then one minute silence.

The Last Post was the trumpet call sounded at 10 o’clock each night to tell the soldiers that their day’s work was over. It is played at ANZAC Services today to remind us that the soldiers have come to their final resting place. After the Last Post is played we will observe a moment of silence for one minute. This is a sign of respect for the men and women who have given their lives whilst serving to protect our country.

The Rouse was then played to the raising of the flags from half mast. This was played in wartime to wake up soldiers in the morning and to raise their spirits, ready to fight another day.

Everyone joined in singing “The Spirit of the Anzacs” https://www.youtube.com/watch?v=Q20DUaIzYJg

Our ANZAC ceremony concluded after with a Thank you to our special guest, Mayor Grant Henley, Staff, students and Student Leaders. The flags were lowered to half mast until 12 noon when once again they were raised to full mast.